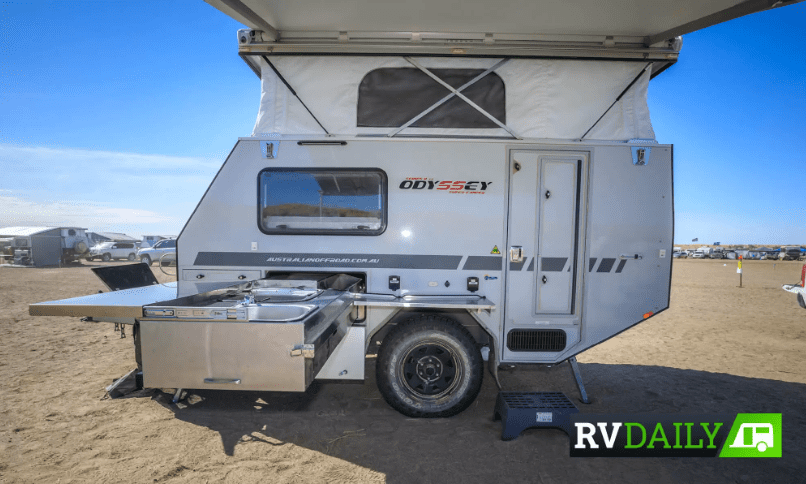 When I was told I was to take the Australian Off Road Odyssey Camper from Caloundra to Birdsville and the Big Red Bash, my initial thoughts were that I’d be taking something like the hard floor folding camper-trailer – a great reputation and the one that got the ball rolling back in 2000. Move on, Andrew … because AOR certainly have!

After a bit of research, I realised that this trailer was no longer in production and that the Odyssey Series II had not only taken the name, but taken out awards as camper-trailer of the year against quite a line up. I like to form my own opinion, but I did read some interesting reviews from current owners, and dare I say other publications, that certainly gave this camper a good scorecard. Speaking of scorecards, one thing I loved was that AOR provides an Off Road Buyers’ Guide on its site, which you can download from the right of this page – it is very handy when comparing trailers, and it shows that AOR must have confidence in its products. So, back to the review. The AOR Odyssey Series II is a camper-trailer, not a caravan. Yes, I know it looks like a mini pop-top caravan and yes, it comes standard with a fairly nice ‘caravan-style’ interior and yes, it can be optioned up with lots of great caravan-type accessories, but … it isn’t a caravan. The Odyssey’s tare weight is 1400kg and its exterior body width is 1950mm, unlike a caravan’s typical width of around 2500mm. It can go all the places its namesake went; its design with the 30-degree rear exit angle and the fact it doesn’t need the biggest 4WD to tow it makes it a good option for the van buyer that wants to go bush…in a trailer. Come on, let’s face it, we are all wanting more these days, and as AOR states, any discerning off-road adventurer would be happy with this unit. Our initial team of four adults were to use this as a base as we travelled on both bitumen and dirt to the 2017 Big Red Bash. No, not sleeping four adults inside (although we did very comfortably play cards inside) – I was the only sleeping occupant on this journey. The rest of the team had swags and tents, so I was the only one that could hog the queen-size, inner-spring-based bed and get a good night’s sleep … sorry team. That’s fine in ‘night’ mode, but what about ‘day’ mode? Well, once the pop-top was raised, the bed could hinge back quite far and a table could be easily placed for eating, playing cards, etc. Add a Bluetooth radio and some nicely positioned speakers and this trailer converts to a rather comfortable dining area.  Hang on this is a camper-trailer isn’t it, time to head outside! This is where the design excels: a fantastic slide-out kitchen with a sink, hot and cold water, a large storage drawer, a couple of preparation areas and a three-burner gas cooktop. With easy access to the 75-litre fridge just inside the door, the crew and I found that it was very convenient for our lunch preparations. We all shared cooking duties, so at night the cooktop was put to good use. Is it living up to my pre-conceived ideas? So far so good.

A good size tunnel boot up front and interior (soft closing, no less) drawers inside allowed us to have more than enough room for chairs, annexes, food and supplies. Extra under-bed storage was revealed when we lifted the bed, so clothes storage was taken care of. I confess we didn’t set up the rear shower and toilet area, but after setting up those portable shower and toilet tents over the years, and having lots of laughs and mishaps trying to fold them up, this extra room looked a breeze to use.

Speaking of breeze, did I mention this is a camper?

Well as a camper and being able to travel on some fairly rugged dirt roads, the breeze and dust created on those roads usually manages to get inside somehow … not in the Odyssey, though. I was super impressed as I shut the doors and hatches – I could feel the seals working and closing properly and after a day’s travel, all was good on the inside.

I’ve already mentioned that this is a light trailer and to be honest we didn’t have it fully loaded, but even if we did, the old saying of “you hardly know it’s there” certainly applies here. Everything just worked; the weight was evenly distributed and the suspension made this camper a great tow.

I was trying hard, but could I find anything wrong? Simple answer … not really; minor niggles.

It’s a camper, a small and neatly packaged one at that – if I wanted a caravan or an ensuite or just more room, then there are other AOR campers and caravans that would easily accommodate my needs. AOR is Australian made, high quality and with robust construction that has a great reputation. And this reputation was highlighted when we were at the Big Red Bash – we were among approximately 100 AOR owners, people that had travelled from all over Australia to one of the most unique destinations in the world in all sorts of road and weather conditions, for what is one of the most unique outdoor concerts in the world.

Read the article on RV Daily

MEDIA – AOR in the Media

​Camper Trailers Australia Review on the Quantum Plus