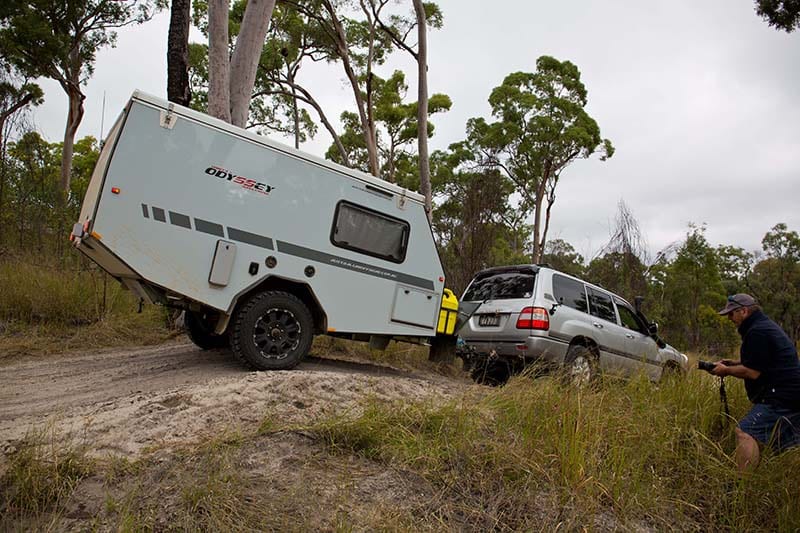 We have just returned from the shakedown of the new Odyssey Series II NxGn. What a fabulous little trailer it is. It’s like a magnet for people who just want to have a look at the cute little thing. But it does everything it was designed to do so well. We were joined by owners Alan and Chris Stevenson, Peter and Claire George, Gary and Deb Johns and Peter and Jackie and Peter Bernas who towed the Odyssey and tested it for us.

We took it for a photo shoot through the bush at Salvator Rosa at Carnarvon Gorge National Park. The 4wd manners are first class with its short drawbar, excellent entry and exit angles, narrow body, no awning arm protrusions and light weight all combine to make a real off road winner.

People who are drawn to the Odyssey S2 NxGn are surprised by the internal space afforded by the lift up bed design, at one point we had 9 people inside discussing the layout.

We encountered only about 300km of dirt roads but this was still a good indication of its touring manners. The trailer tows like a dream as it retains all the same chassis and suspension of the Quantum but is lighter by 350kg. As the drawbar weight is less than 10% we installed two 140 litre water tanks, one front and one rear. Peter who joined us on the trip to test the Odyssey, chose to use the rear tank first to retain adequate drawbar weight for dirt road towing and for better balance.

The front tunnel boot is a real winner as it swallows loads of gear easily. The new custom made entry door with full perimeter seal provides perfect dust proofing on the long dusty roads however we have to manufacture a suitable fly screen to the door. The fridge access just inside the door worked well and is one of the compromises of the compact design. It’s a Vitrifrego with a remote compressor and is extremely efficient, at times it was turned down to zero and still operated well.

The 300 watts of solar kept the twin 120a/h AGM batteries charged at all times despite some overcast days. The electrical system features the Redarc Manager 30 charging system and I was surprised at the efficiency of this unit as it combines the solar charge and the car charge if the batteries will handle the input. I have never seen this feature before and it maximises the charging ability by reducing charge times. I checked the controller read out every morning and it was never below 85% SOC for the entire trip despite cloudy days. This is due in part to the size of the solar and battery system and the efficiency of the fridge and lighting.

The under bed storage section was a real winner with Jackie as she was able to fit all their clothes in this area. She particularly liked the compartments beside the bed for small items and the clean white covers that closed off the storage areas. These are essential as they close off this storage area from view when the bed is up during the daytime and keep out any dust that may enter through the windows. It was agreed that the Porto pottie should be kept in the front boot and the rear cupboard where it currently lives redesigned to give a more efficient use of space.

The camper is fitted with a vinyl rear shower room which we did not use however it’s a simple design we have used before and it works very well. We are also developing a new rear shower pod design, this should be available very shortly.

Everything worked well except we found the awning was not large enough to cover the kitchen area. To rectify this I am considering a wing awning and should know next week if it will be suitable. As with all designs there are compromises but I feel this design is the future of the small pop top as it’s so space efficient and so light weight.

The Odyssey Series II gets put through its paces