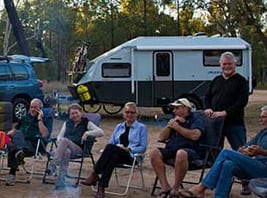 You are a third time owner, what is it that you love about AOR?
Deb and I have been AOR owners now for over seven years, starting with a one year old Odyssey Export Signature. We towed that trailer from Sydney all over the Flinders Ranges before embarking on a 17,000km trip through QLD, NT and WA, including the Gibb River Road, Mitchell Falls (towing the Oddy), Cape Leveque, Tanami track, far western NSW, etc.

All in seven weeks!

By that time, as great as the Odyssey was, after 7 weeks we had had enough of canvas as we were on the road nearly every day.

That prompted us to sell the Odyssey for a great price and bought a new Quantum in January 2014.

The Q went on an extended trip via Vic, SA and WA this time across the Nullabor to Kalgoorlie, Perth, Margaret River, Cape le Grand, then the Great Central Road to Kata Juta (Olgas) and Uluru.

Home was via the Oodnadatta Track and Broken Hill. This trip was only 15,000K and 3 months, so much less hectic.

Neither trailer gave us any trouble except a broken Truma water heater (the tank split on the Kalumburu Road) and a broken gas pipe on the stove at Cape Leveque, both on the Odyssey. Neither of these were the fault of AOR’s build!

After some abysmal weather last year after the Big Red Bash in Birdsville, we decided that we wanted the option of inside cooking, so we sold the Quantum last December and have just taken delivery of our third AOR trailer a Matrix Pop Top.

This ticks all the boxes we have learned over the past 7 years. We optioned the outside kitchen so we can still spend most of our time out in the fresh air.

What makes you want to be an AOR Ambassador?
We love AOR products and are happy to spend time with interested parties.

We have helped out at three or four local caravan and camping shows, including the big Sydney one that ended last weekend.

What do we love about AOR?
First and foremost the owners’ community which is encouraged by AOR.

We have attended three Victorian high country rallies, two NSW rallies (including the first one in Armidale back in 2010) and last year’s Qld expedition to the Big Red Bash in Birdsville, to which are going again this year.

What’s your No1 travel bugbear?
We find a nice secluded spot and then someone arrives and sets up camp right beside us!

You’ve probably been off the grid many times what is the most remote location you have visited?
Nothing too extreme, probably a toss-up between Docker River on The Great Central Road or stopping at the WA/NT border on the Tanami Track. Didn’t see another person for nearly 24 hours. What is common with all of these spots is that we are treated to the most spectacular evening skies, stars & the milky way like you’ve never seen it.

When you arrive at your destination what’s the first thing you do?
Crack a coldie and watch Deb set up the van

What is your favourite dish you like to cook when traveling?
Butter chicken for Deb and a juicy rump steak on the Weber for me.

Outback travel with a caravan – do you carry and conserve enough water?