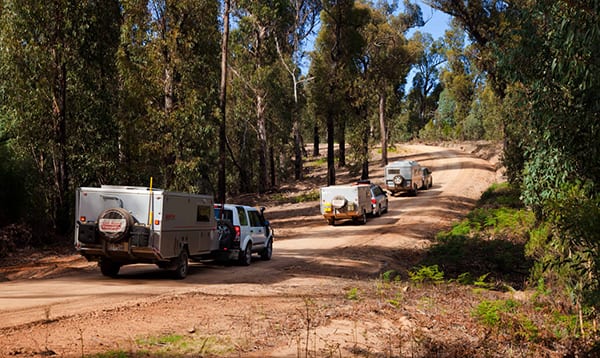 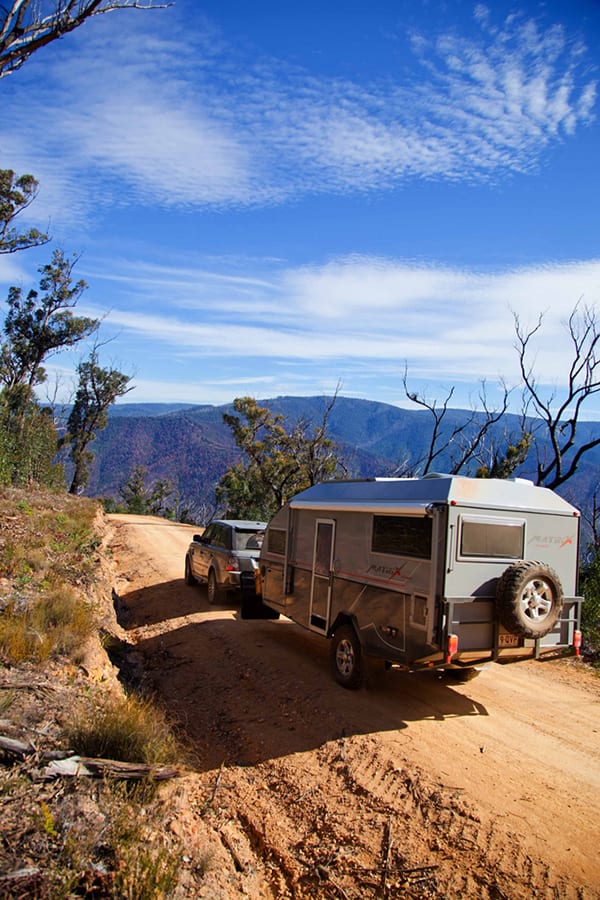 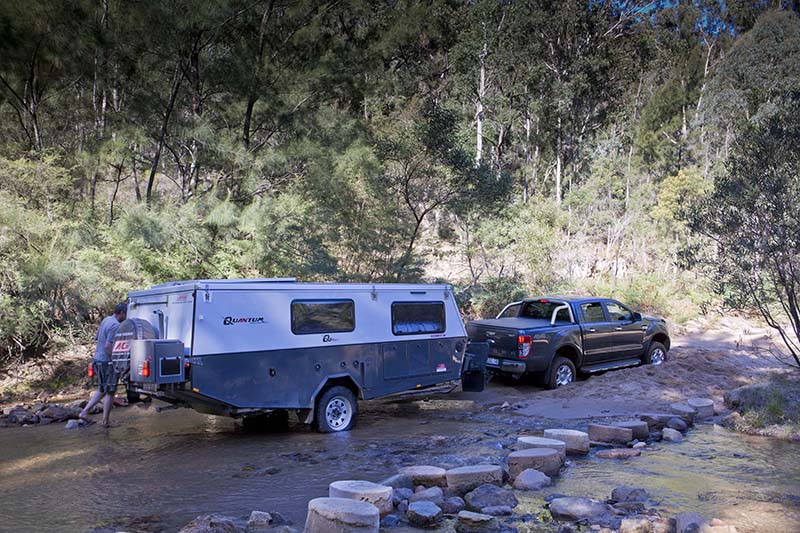 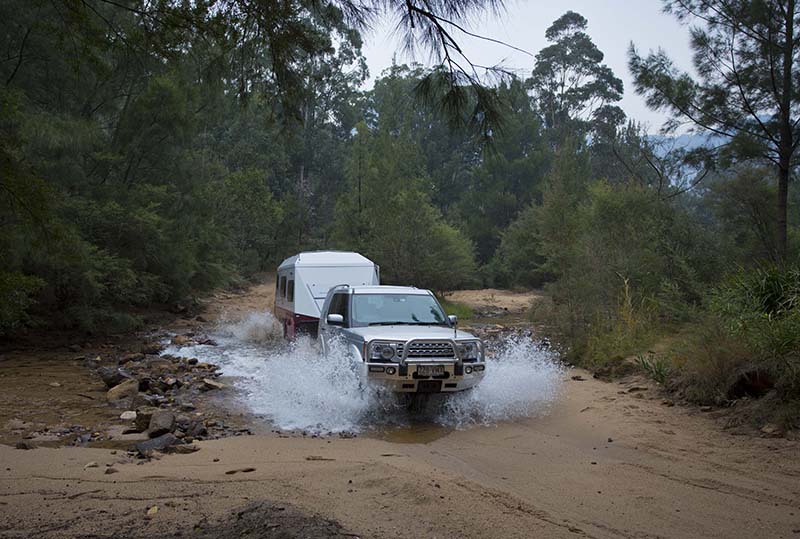 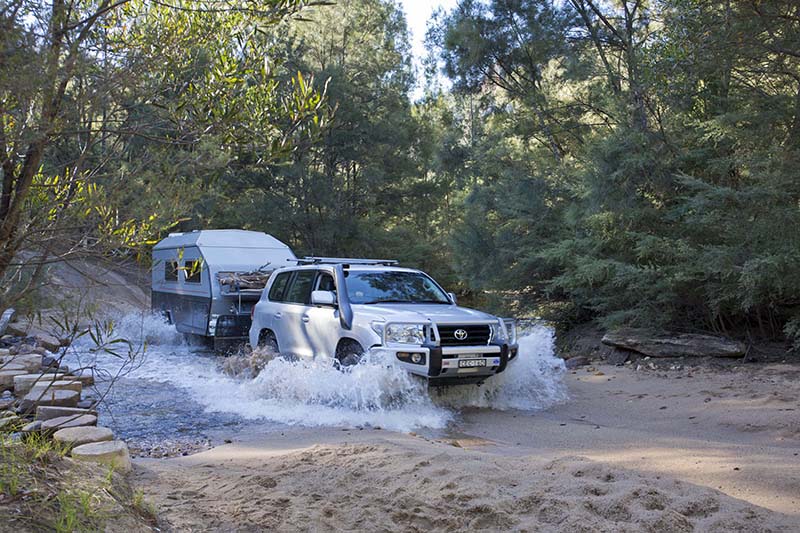 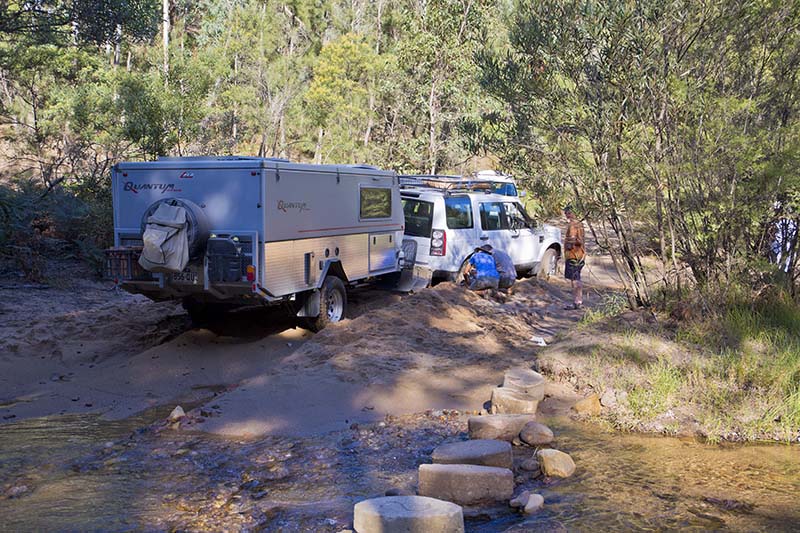 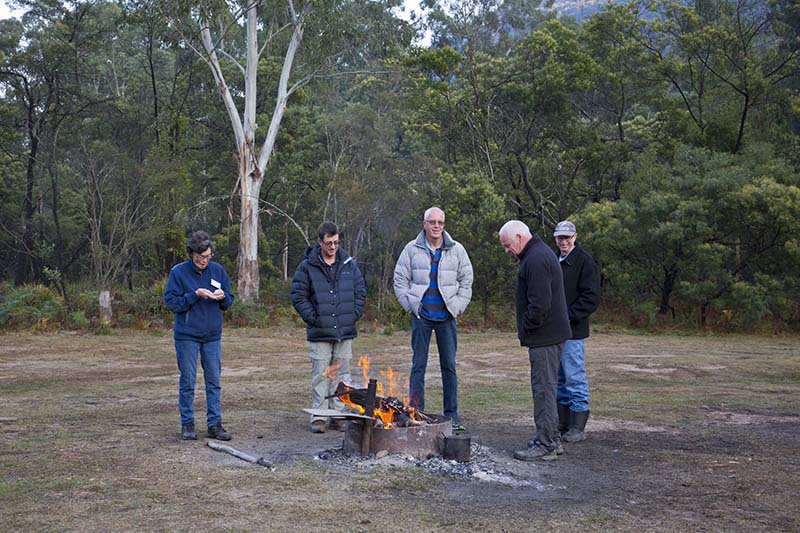 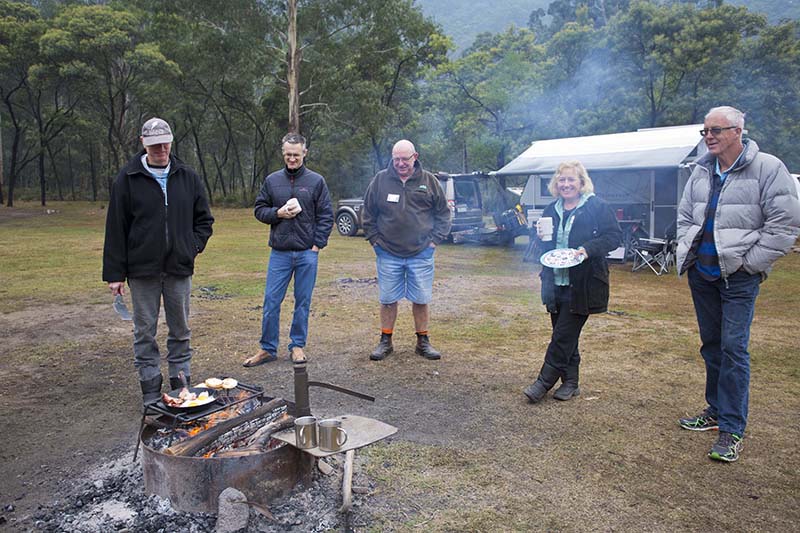 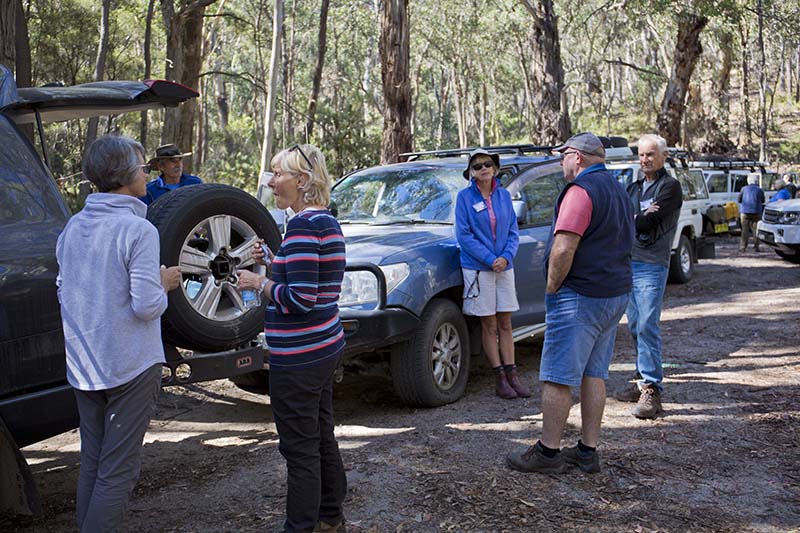 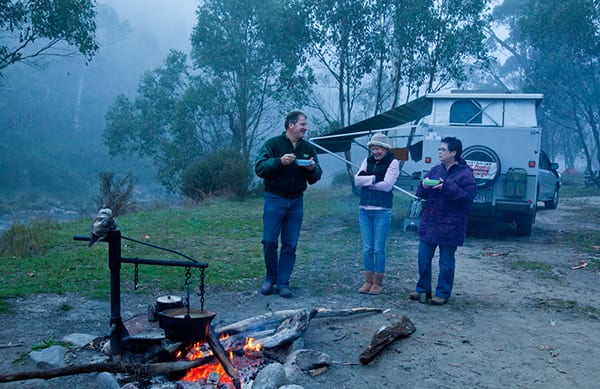 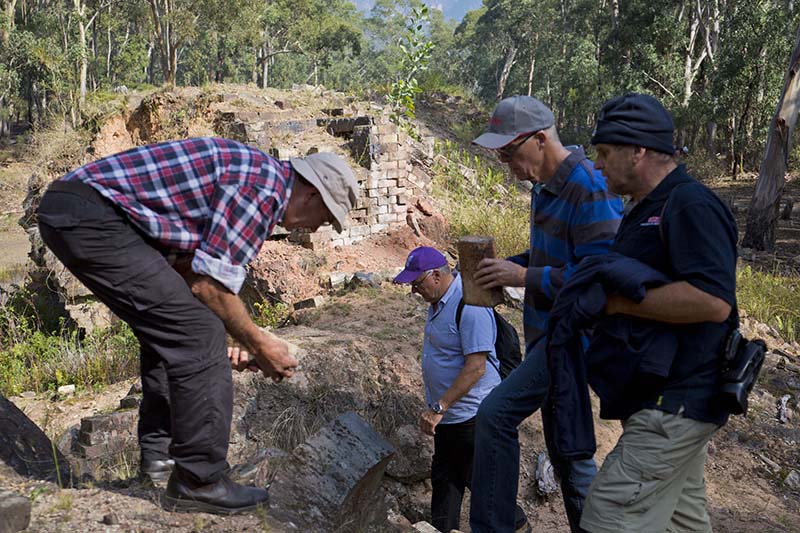 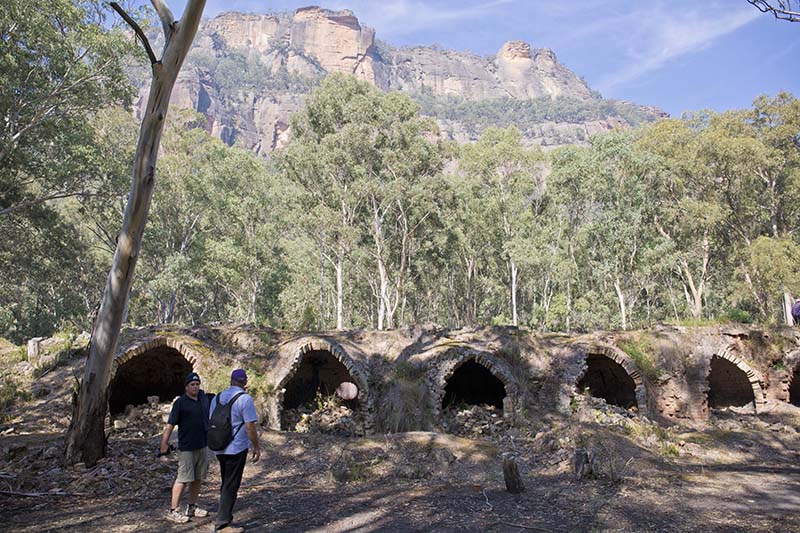 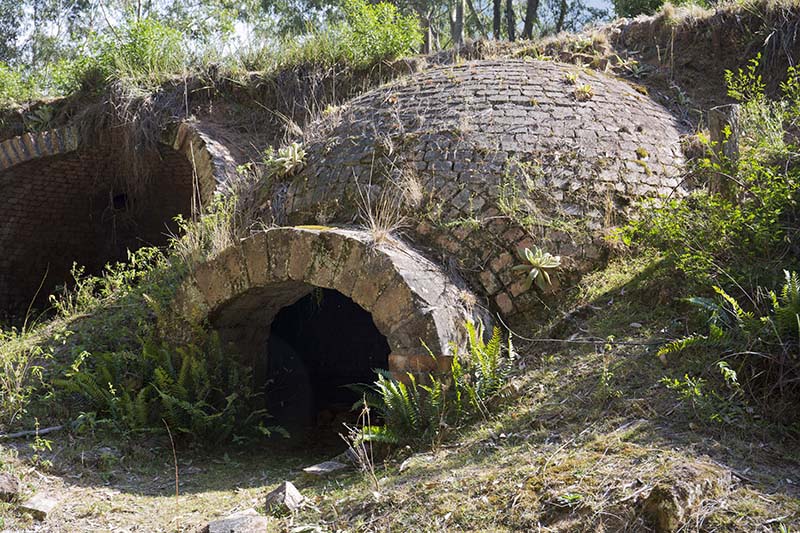 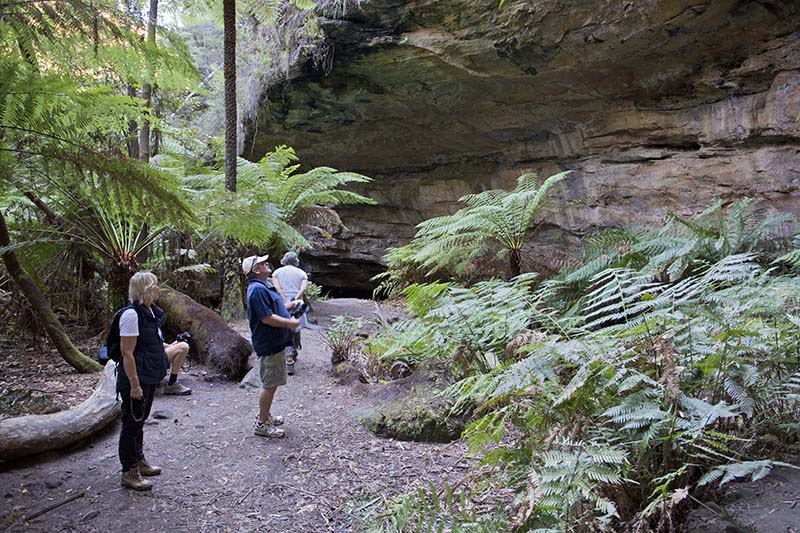 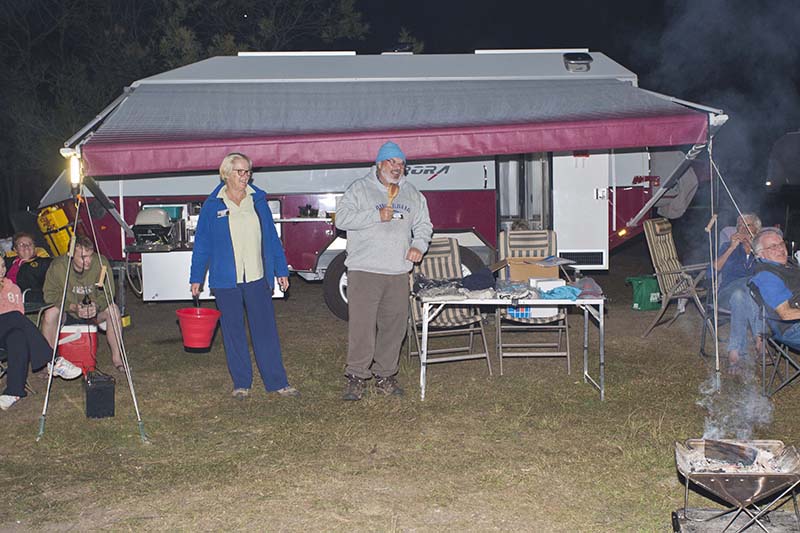 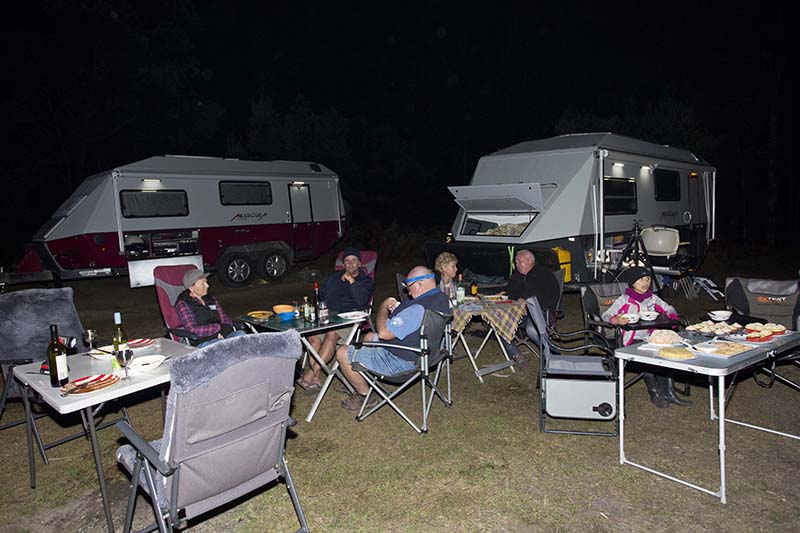 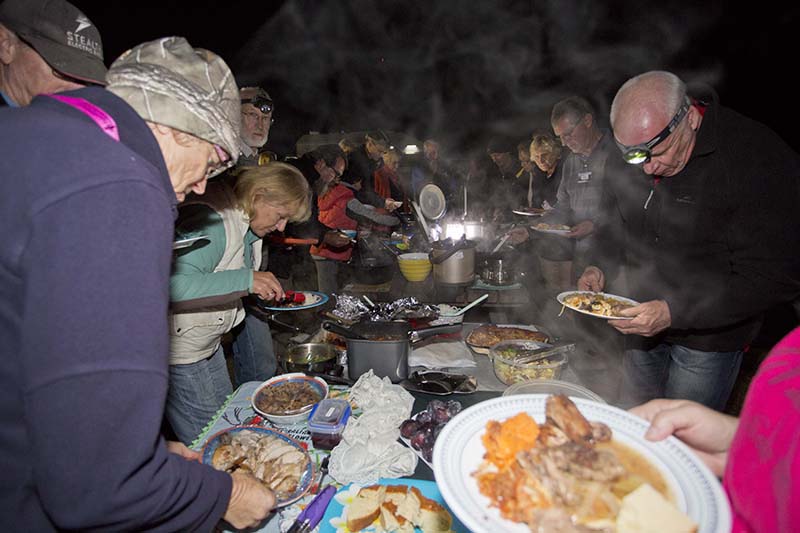 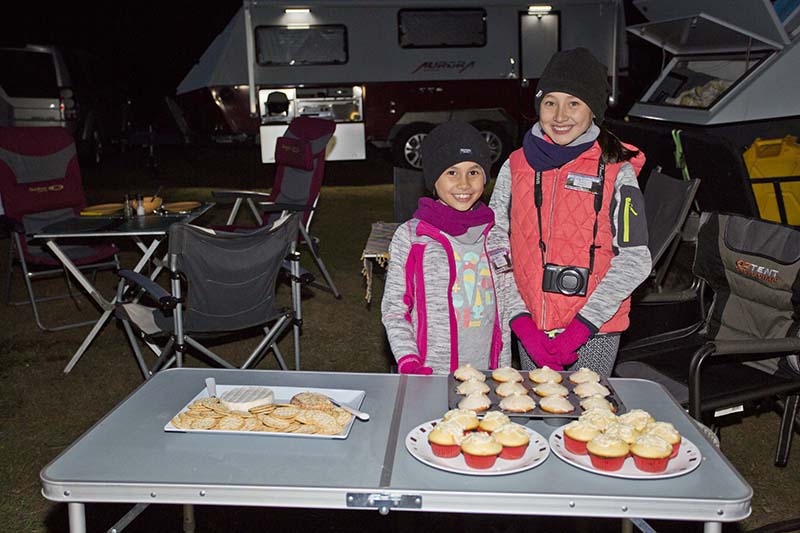 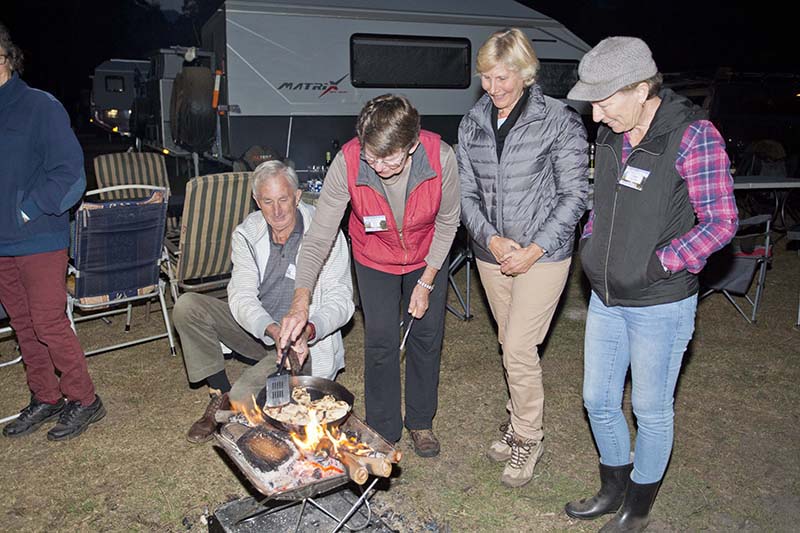 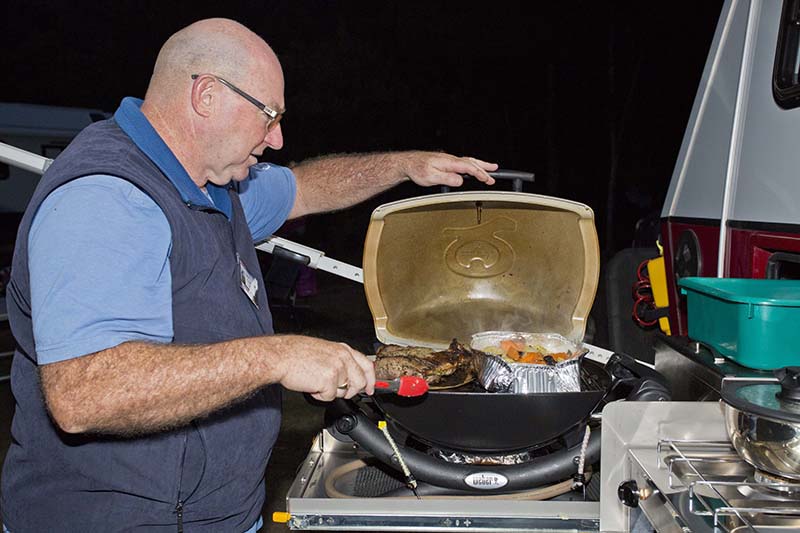 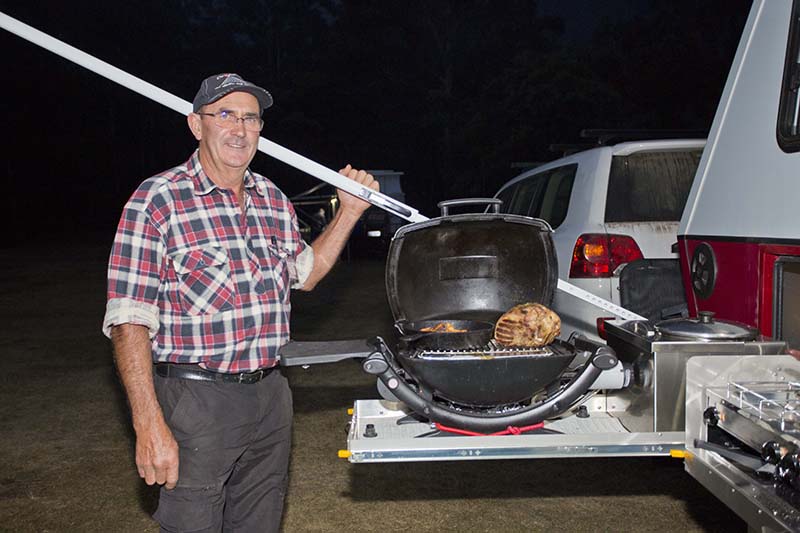 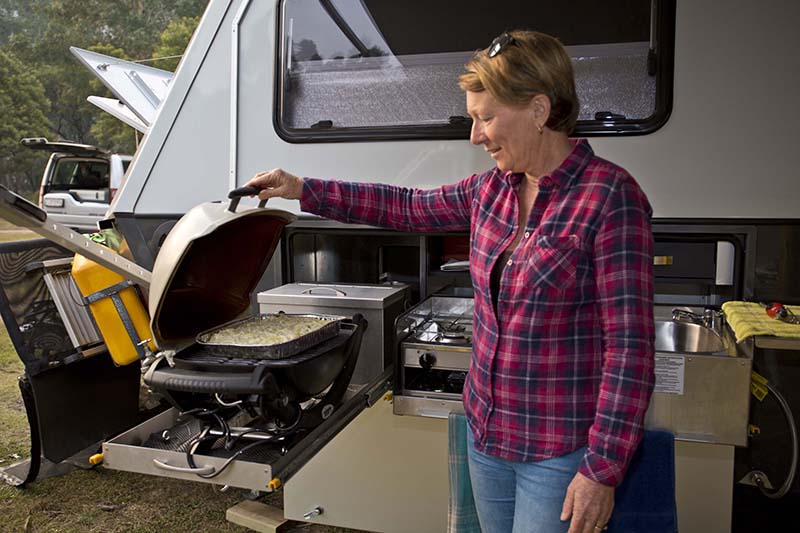 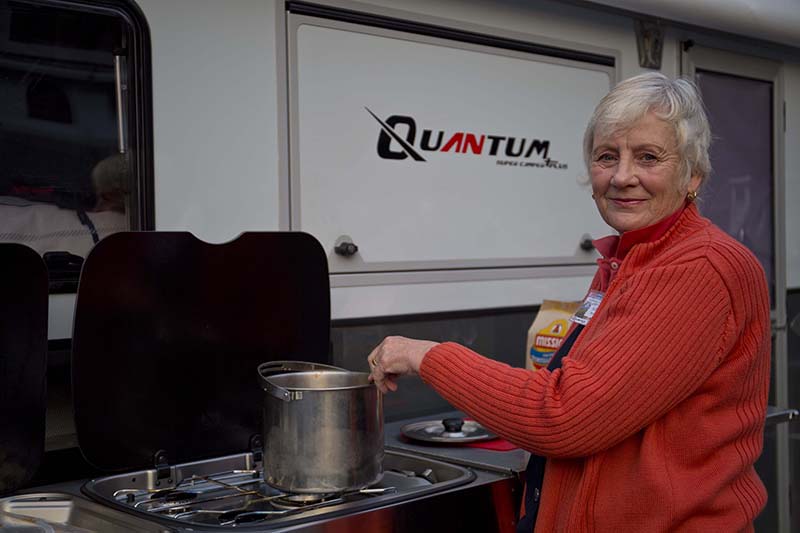 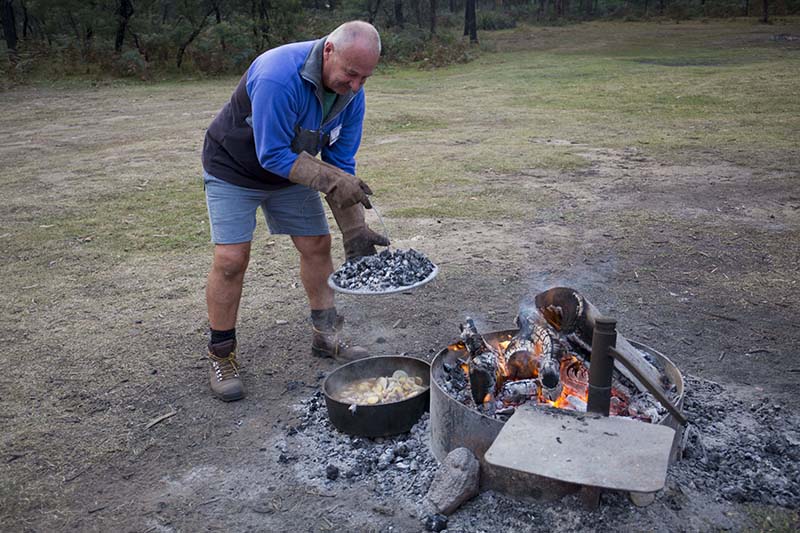 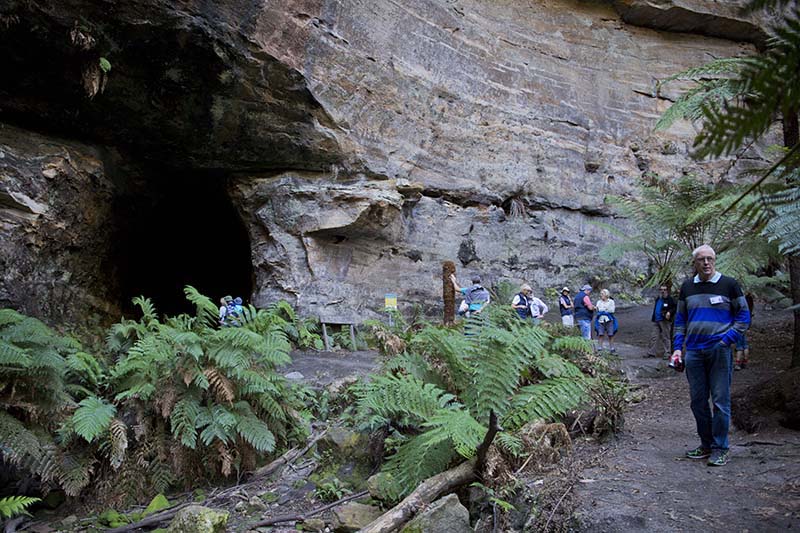 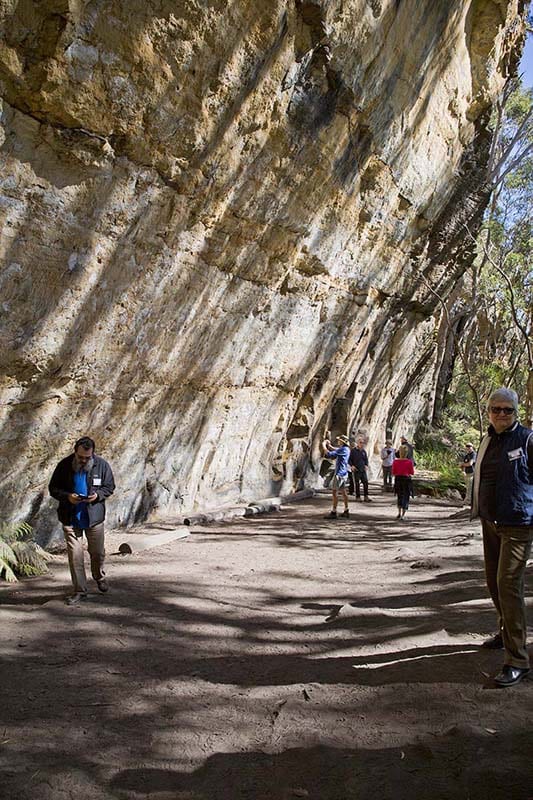 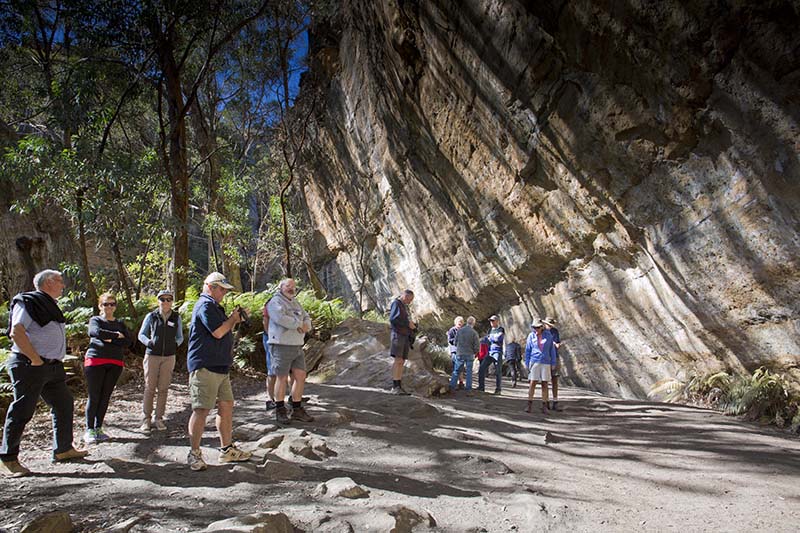 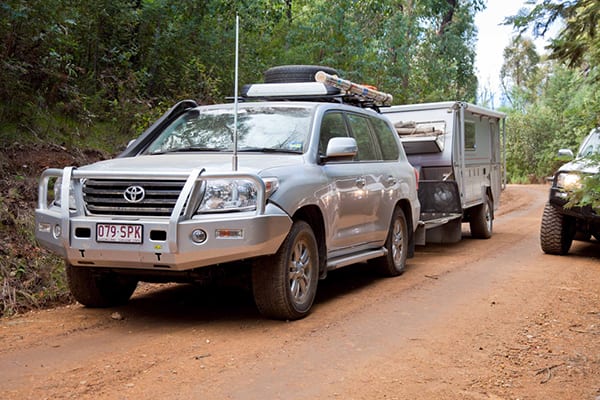 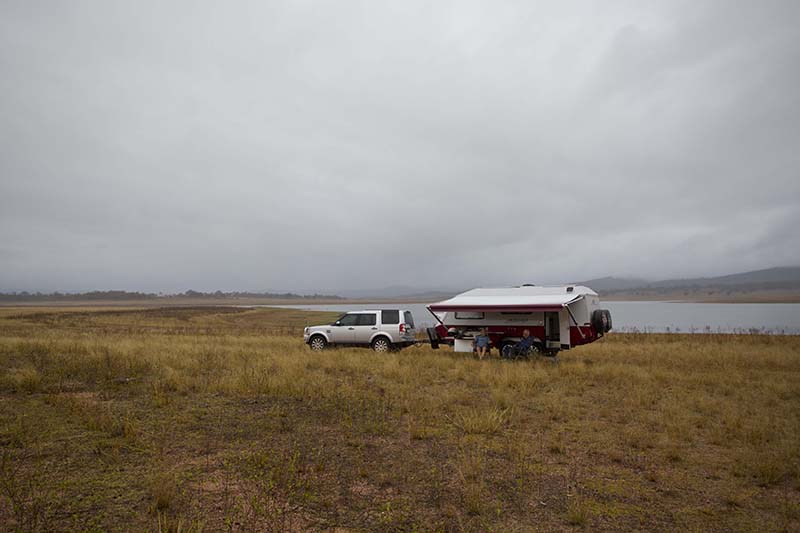 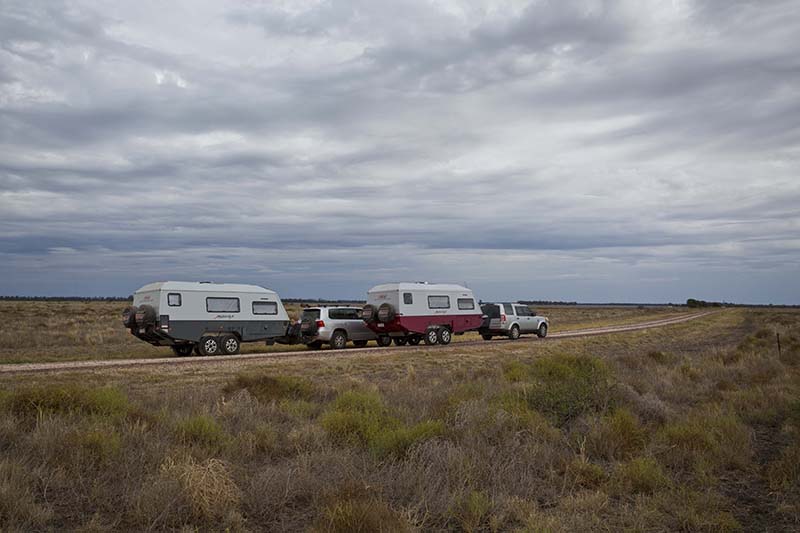 After attending some of the entertaining and highly successful AOR Victorian rallies Chris and Marie Taylor, somewhat bravely, made the decision to host a rally in New South Wales.

Newnes is a lovely flat grassy campsite surrounded by a majestic amphitheatre of sandstone cliffs lined with towering eucalypts, and it was here twenty-five AOR vans converged for the May 2016 get-together.

Well, when we say converged, we have to own to a slight challenge along the way. This took the form of a patch of soft sand on the other side of the ford near the Newnes Hotel. With a Ford …… and Quantum Plus well and truly bogged we had a line-up of other arrivals behind them. Far from being impatient, they were set to enjoy the entertainment. Fortunately, Chris was prepared with his vehicle on the opposite side and after much digging and some serious winching Geoff and Alex were on their way to camp. Here we have to confess that a Disco and Quantum also went down (oh, no!!!) but were able to get themselves out with a bit of shovelling and lowering of tyre pressures. Given this potential pitfall Al and Chris and Steve and I with the two Auroras had an ‘ah hem’ moment. But with the significant advantage of being forewarned, and forearmed – with a heavy right foot – we made it through unscathed. The same can’t be said for some of the unfortunate onlookers, drenched by the Disco’s towering bow wave.

With everyone safely in camp it was introductions all round and a natural progression to an extended happy hour/evening around the campfire. The great thing we’ve always found about AOR get-togethers is how easily participants mix. The camaraderie is completely spontaneous and the common ground amongst owners creates fertile ground for ongoing friendships.

Day two’s activities involved a drive over some 4W drive tracks to the caves, then on to the glow worm tunnel, part of the old railway that once serviced the area. A walk through this tunnel to see these luminous little creatures is one of the popular features of this area.
1. Morning tea stop 2. Caves on the 4WD trip 3. Caves on the 4WD trip 4. Glow worm tunnel 5. Rainforest near the glow worm tunnel 6. Historic shale oil oven 7. Historic shale oil ovens 8. Examining the ruins 9. Campfire on a cold morning

Day three was an easy morning in camp before a walk to the nearby tunnels and ovens of the historic shale oil ruins. It is quite mind-boggling to get a picture of the extent of activity here so long ago, including the effort that would have been involved in the building of the rail line.

Preparations for the shared meal generated a great deal of activity and excitement throughout the afternoon. Webers and camp ovens were out in force with ongoing inspections of everyone’s creations. Even delicious cupcakes appeared – baked in the Weber by two of our youngest participants. The results of all the efforts were devoured around the campfire with much gusto and the fun and humour of a great social event.

As always, leaving is the most difficult part and the next morning it took several hours to say our goodbyes. We would like to say a big thank you to Chris and Marie for their efforts in making this rally such a successful and highly enjoyable few days. There is some mention of making it a yearly event and already some enthusiastic sign-ups!