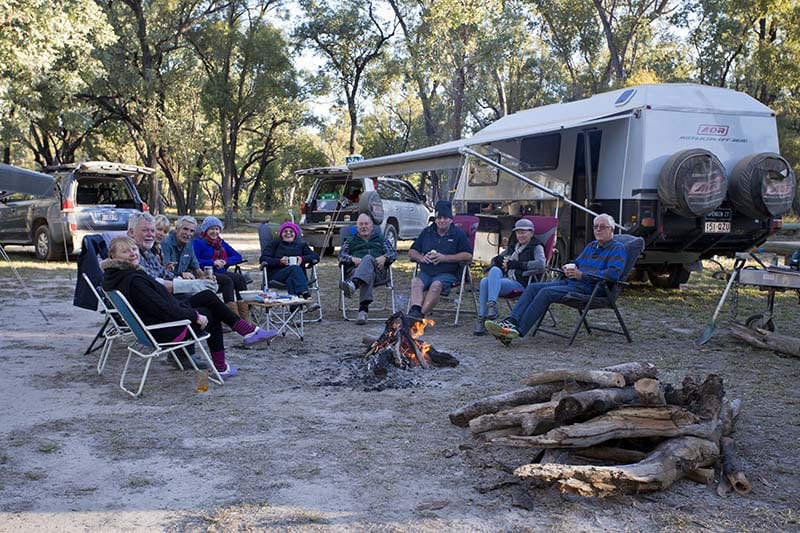 When our planned departure was on a day that coincided with the forecast of a severe weather event you could be forgiven for thinking we were somewhat crazy.

Whether we can the credit for the drought breaking rain by planning a camping trip or whether it is more attributable to the vagaries of La Nina who can say. But whatever the case, with a small window of opportunity, and ever the optimists, we considered that in heading west we’d hopefully drive out of the deluge. Fortunately this turned out to be the case.

The rain cleared long enough to set up at our first camp at Boolooma Dam near Proston and although it continued to drizzle throughout the afternoon, the following days were quintessential Queensland winter weather with blue skies, warm days and cool nights.

The trip was planned as a test run for the all-new Odyssey Series II and although we had hoped to venture further west to Coongie Lakes with roads being cut in that area Salvator Rosa was a compromise. Pete and Jackie Bernas had generously offered to trial the Odyssey and as existing Quantum owners their feedback was detailed and invaluable. The Odyssey looked like a miniature compared with the vehicles of our other participants who were Al and Chris from Coolum in an Aurora, Gary and Deborah from Sydney in a Quantum Series III, and Peter and Claire from Tassie and Steve and I from Caloundra in Matrix Series IVs.

At Boolooma the unpowered sites provided the prime waterfront location, the only down side being these were on a bit of a slope. Since Steve has an aversion to the use of a shovel unless absolutely essential, he used an old trick of placing the uphill wheel of the Matrix in one of the many washouts in order to make it level. This started a bit of a trend to find the right ‘hole’ and led to this location being dubbed the 18-hole campsite.

It appears Boolooma is a popular fishing spot and luckily a major fishing competition involving hundreds of boats was just finishing when we arrived or it may have been quite noisy and busy. Somewhat serendipitously, our visit coincided with a full moon and potential images of a full moon over water offer much to tempt a budding photographer. Trouble is, the temptation turns more to serious ambivalence when it involves emerging from the warm cocoon of the Matrix at 4am on an icy morning and standing in the freezing cold with only tripod and camera for company.

Washing when camping is always a vexed issue and in a moment of idle curiosity I sought a solution from the online fount of all knowledge shortly before our trip. The result was the purchase of a Companion Ezywash machine for a grand total of $60.00, a unit the size of a large bucket, with a twin tub and capable of running off an inverter. With no time beforehand we decided to experiment with it in company with our fellow travellers. The result was a great deal of hilarity when it was inclined to vibrate off the table on the spin cycle, but consensus was that it probably earned its space for the convenience of being able to wash the smalls in remote places.

Next stop was a pleasant little free camp at Judd’s Lagoon, but on the way Al had the challenging task of finding a birthday cake for Chris. It was challenging because good country bakeries seem a bit scarce on the ground (especially if you require something other than white bread). Whether what Al found qualified as a birthday cake is questionable but it was a good excuse for some extra celebratory drinks around the campfire.

Injune is an easy step to Carnarvon and while our preference is generally for free camps, in this instance the lure of having a meal and watching State of Origin at the nearby pub sealed the decision to stay at the caravan park. Believe it or not, though they may be a rare species, there are some non-football fans in the population but in our group even these joined in the colour and enthusiasm of the evening.

On the recommendation of staff at the Injune Info Centre we detoured en route to Carnarvon onto the Arcadia Valley Highway and were rewarded with a drive through a magnificent valley lined with picturesque farming properties embraced by spectacular mountain ranges.

Takarakka, the caravan park providing access to Carnarvon Gorge, was our next stop, after a mandatory stop for firewood. This was a somewhat hopeful enterprise, not knowing whether fires are possible there, but collecting the wood is always lots of fun and Peter B wanted every opportunity to prove that his cheap electric chainsaw really did work. As it turned out we did make use of a communal fire pit where we were joined by other campers from places far and wide, including Finland and Sweden.

There’s much to see at Carnarvon for the avid bush walker but for those with more moderate levels of fitness it’s a bit of a challenge. Because most of the various features branch off a single entry track the temptation is to try to see everything on the one day rather than taking the wiser option of doing it over several days. In a significant over estimation of our level of fitness we took the one day option and although Ward’s Canyon and the Amphitheatre in particular were spectacular, we had shared complaints for several days following about stiff calf muscles.

The Odyssey attracted lots of attention in camp at Takarakka, in fact Pete and Jackie were kept busy fielding questions from a number of genuinely interested potential buyers.

Salvator Rosa was our ultimate goal and we were keen to get going onto some real 4W driving. Only very limited information had been available about this area despite numerous phone calls to national parks and various info centres. It seems the road in is frequently cut in areas of black soil and with the recent rain we were uncertain what to expect, so we were venturing somewhat into the unknown. We stopped to reduce tyre pressures when we hit the dirt and though the road into the park itself was single lane and quite narrow there were no problems at all. The Negoa River camping area is quite small and with numerous trees and our requirement for solar it was a challenge to find spaces for our five vans.

It’s definitely worth the effort of getting to Salvator Rosa. Once across the Nogoa River a sandy track, at this time lined with flowering wattles, led to Spyglass Peak and Belinda and Major Mitchell Springs. The easy 1km walk to the base of Spyglass Peak was a relief to our long-suffering calf muscles. The following day was another easy walk up Homoranthus Hill for a spectacular view across to Spyglass and the jagged peaks of the ranges.

The track provided the ideal setting to put the Odyssey through its paces and get some good footage. With able assistance from some of our crew Al was in his element with video cameras mounted on, under (whew – that was close!) and beside the Odyssey. For me it involves jumping in and out of cars, running up and down tracks and often traipsing through bush to get the best angles for the still shots………. all part of the fun. In fact it was such a good opportunity we repeated the exercise with the Series IV Matrix the following day.

Make the aforementioned cool nights cold. No, make that icy – literally – as in -2 degrees. Our happy hour campfires increased in size each night as the temperatures dropped, and the diesel heaters were worth their weight in gold. Again the Odyssey received lots of interest from two couples who had obviously been a bit cold overnight in their camper trailers. It made for an interesting pack-up on our last morning having to remove ice from the awnings before rolling them up.

As always, parting ways is the difficult part of such a wonderful trip. The Odyssey performed faultlessly, with Pete and Jackie suggesting just a few minor modifications that Steve has taken on board. Interesting adventures on a shared journey and lots of laughs around the campfire are fertile ground for the development of great new friendships. Al and Chris, Peter and Claire and Deb and Gary had lots more fun to come heading out to the Big Red Bash at Birdsville (another story in itself), but Pete and Jackie and Steve and I were reluctantly heading home.

Now, when and where will we go for our next trip.