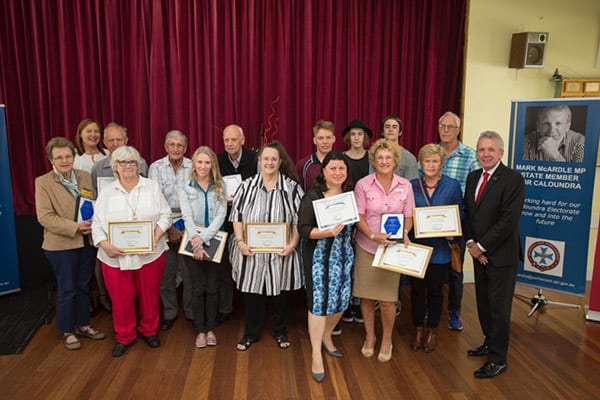 Member for Caloundra Mark McArdle has congratulated the local community for their outstanding representation in the 2016 Caloundra Electorate Community Awards.

Now in its fourth year, the awards recognised the following winners:

Popular Coast band Hoo8Hoo was recognised for their efforts in giving back in the community, particularly for hosting a charity concert at Aussie World for local Sunshine Coast children battling life-threatening illnesses.

“Sam and I have been doing this for five years we’re really glad the community inspires and supports us,” Tim Aitken said.

Andrew Cusick was crowned Young Sport Achiever of the Year for an impressive baseball career that included being selected to play for the Australian all-star team World Series.

“I’d really like to thank my family and all my team mates and coaches in supporting me,” Mr Cusick said.

Australian Off-Road received a nod as Business Achiever of the Year for producing top-quality camper trailers.

What started as a one-man operation in a garage 16 years ago has transformed into an 80-strong workforce in a purpose built 5,500m2 factory and showroom on the Sunshine Coast.

“We’ve been in business for many years plugging away and sell all around Australia and are very thankful for this,” Mr Budden said.

Beerwah Charity Sports Day was recognised for their tremendous contribution and fundraising efforts to the Cancer Council.

“Some of our members have been working on this event for 45 years … you don’t achieve that success without supporting the local community,” Beerwah Charity Sports Day Chairman Bruce Page said.

Caloundra Chorale and Theatre Co. took out the top gong for Community Group of the Year for their dedicated affordable performances and focus on creating ShowBizKids.

“We really do perform for the community and have been entertaining for nearly 50 years,” Bruce Underhill said.

Jade Dean was crowned Sport Achiever of the Year for her 20 years as a soccer player with the Sunshine Coast Churches Association and was the first female player to gain such recognition.

“I’d really like to thank my family for introducing me to the sport of soccer and the community for allowing me to play this great sport,” Ms Dean said.

“This is quite a surprise, what everybody has achieved goes straight back into the community,” TAPP President Ken Mewburn said.

Lastly Kim McCosker of 4 Ingredients Fame was awarded Caloundra Hall of Fame Identity for her incredible efforts in promoting Caloundra and the Sunshine Coast and many charity efforts such as creating the Cook for a Cure cookbook for breast cancer research.

“This really shows that if you have a true passion you really can achieve anything,” her mother Jennette McCosker said while accepting the award on her behalf.

Caloundra MP Mark McArdle said the awards amazed him every year with the depth and breadth of talent nominated.

“These Awards are about recognising the best of the best in our community and I am continually inspired by the people whose names are thrown in the ring.”

2017 Camper Trailer of the year