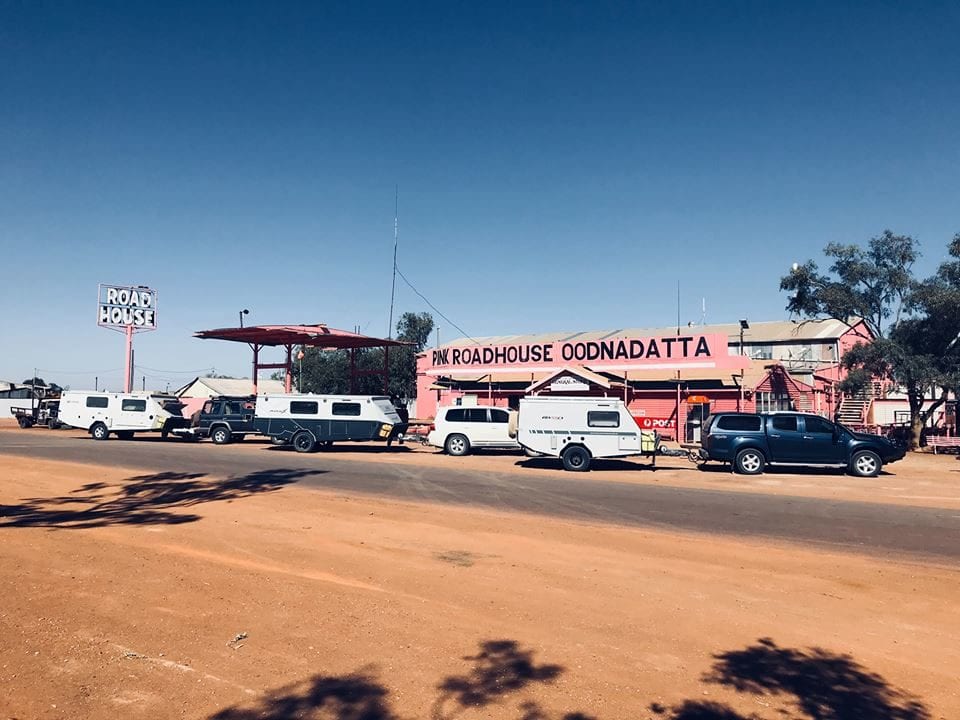 A fantastic photo by Paul Nielsen, capturing a chance meeting of AOR owners!

“An outback icon and a lifeline for travellers on the remote Oodnadatta Track, the Pink Roadhouse has entered into a new phase of its history.

“It’s a bit isolated,” said Neville Jacob, the new owner of the iconic Pink Roadhouse in Oodnadatta, SA. His resistance to hyperbole is fairly typical of the no-bullshit folk you’re likely to meet out here. About 1000km north of Adelaide, Oodnadatta is Australia’s hottest, driest town with a population of just 80 people. It’s a bit isolated, yes.

But Neville is quick to point out that he meets a great many people as the proprietor of the much-loved Pink Roadhouse, and that’s hardly surprising, given its location on the popular Oodnadatta Track at the southern gateway to the Simpson Desert. For those who don’t like tarmac, it’s the logical way to get from Adelaide to the Red Centre and the road is usually in good condition, making the trek perfect for beginners and suitable for the towing brigade. With that in mind, Neville reckons there’s never a dull moment at the Pink Roadhouse.

It was certainly hopping when we pulled in, stinging for a taste of the famous ‘Oodnaburger’ after three days of meat and tinned veg in one dry creek bed or another along the track. We found a flurry of activity as mud-covered cars lined up for fuel, ladies lined up for the loo, and hungry mouths lined up for namesake burgers.

Punters shared stories of Simpson shenanigans and Oodna mudslides, the diesel bowser a scuttlebutt where advice and warnings were received by the excited wide-eyes of travellers only halfway there. There had been a lot of rain the week before and the track had only just reopened. The layers of mud on each vehicle were assessed with admiration, like fully displayed peacock feathers as visitors rolled into the unlikely pink oasis. We might’ve been in South Australia’s most remote town, but compared to the vast expanse of vibrant nothingness we’d been traversing for days, this was the height of civilisation.

FRIENDS OF THE OUTBACK

Neville purchased the Pink Roadhouse with his wife Adriana three years ago and they relocated to Oodnadatta, but the two were no strangers to outback life, having lived 200km south at William Creek. By outback standards, that’s just down the road and, as such, the Jacobs were friends with the previous owners, Adam and Lynnie Plate.

After Adam’s tragic death in a car accident in 2012, Lynnie sold the business and relocated to Adelaide. That’s when the Jacobs made the decision to carry on the legacy of this outback icon that has been much-loved by travellers and locals for decades.

THE MAKING OF AN OUTBACK ICON

So why on earth is there a bright pink roadhouse in the middle of the outback anyway? That’s a valid question, and to answer it we have to travel back to the 1970s.

Adam and Lynnie were self-confessed hippies on a soul-searching sabbatical, walking the desert down the tracks of the old Ghan with camels, donkeys and horses. In 1975, they rolled into the little Aboriginal community of Oodnadatta and, after some tension in their touring party, the couple decided to stay on for a while to regroup. They never left.

The town was rowdy but the people were friendly, and there was some activity and vibrancy as the Whitlam government of the day poured money into Aboriginal housing. Aboriginal people here were allowed to drink and vote, and Adam and Lynnie quickly became a welcomed part of the community.

Adam set up a motorcycle repair business in 1978 to service the nearby stations which used bikes to muster camels and, shortly after, Lynnie set up a shop called the Tuckerbox to sell snacks and supplies to the growing number of travellers. It was decorated with a giant Rolling Stone-style mouth with a tongue; they were an eclectic pair. The Tuckerbox also became somewhat of a soup kitchen for hungry kids waiting for their parents to leave the pub.

When the Ghan was relocated and the old tracks closed in 1980, it was thought Oodnadatta – like so many other towns along the track – would die. But Adam and Lynnie had explored the surrounds by motorbike and knew the town was well-positioned to capitalise on the growing 4WD trade, positioned as it was between the Flinders Ranges and Alice Springs. The surrounding country was magnificently contrasting outback: the Painted Desert, the Simpson Desert, hot springs at Dalhousie and Coward Springs, stark gibber plains and undulating red sand hills. Adam and Lynnie poured their efforts into establishing tourism, and immortalised the town by naming the 600km road the Oodnadatta Track.

In 1983, fuel was added to Plates’ service and the place was renamed the Oodnadatta Traders. It was Adam’s idea to paint it pink; as a former art student, he knew the power of juxtaposition and that the contrast between the outback and a candy pink roadhouse would be a talking point for travellers. Shortly after that, it became known as the Pink Roadhouse and, to this day, is still a talking point.

Adam and Lynnie’s philosophy was to make people feel comfortable and safe in the desert. Adam poured a great deal of time and effort into the Pink Roadhouse’s iconic ‘mud maps’ tour; quirky, hand-painted signs and maps dotted along the Oodnadatta Track offering warm anecdotes and information to lonely outback travellers. This huge undertaking adds so much to the trek for modern day 4WDers and serves as a tangible reminder of Adam’s passion for the outback and, in particular, his little town of Oodnadatta. The man may have passed, but his legacy is very much alive and well. Adam’s extensive library of mud maps in available to download at the Pink Roadhouse’s website.

These days, the Pink Roadhouse offers camping, powered caravan sites, accommodation and internet access. It has hot showers, hot meals, cold beer (a relatively new addition), groceries and plenty of pink clothing, hats and other merchandise. There’s a mechanic shop for basic repairs, more than 150 tyres in stock and a 24-hour 4WD recovery service that can be called upon on UHF channel 7 repeater. As has always been the Pink Roadhouse’s philosophy, if you get in trouble out here, help isn’t too far away – a concept that is very much carried on by new owners Neville and Adriana.

Speaking with Neville, it is clear he is humbled to be running this beloved outback icon. He is warm and gregarious with a sparkle in his eye that suggests he is right at home catching the grubby travellers the desert spits out at him, serving them up a cold beer or a hot coffee and listening to their tall tales and grand plans. Such is the life of a roadhouse owner; people are always both coming from somewhere and going somewhere. It’s an infectious energy, and one that this quirky pink palace harnesses to great effect.

Oodnadatta is about 410km north-west of Maree, and 210km east of Marla, via the Oodnadatta Track.

Living the dream, a full time travelling family in our 18ft camper